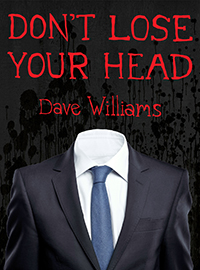 Several years ago, I published Don’t Lose Your Head, a novella of a ghost haunting a guy. I didn’t promote the book, instead choosing to focus on client work (graphic design) and writing other stories. But I wanted to revisit the novella and give it a more rigorous editorial eye. I’m glad I did, since I ended up chopping off 12,000 words from the story and making it much sharper. I’ve stopped worrying and learned how to enjoy editing. It really can make a difference in a story.

As an excerpt, here’s the first chapter of the novella, to give you a taste. If you like what you read, the book is available on Amazon as an ebook and paperback.

Alan Burris glanced in the car’s rear-view mirror and saw an older version of himself sitting on the back seat. As if the mirror contained magic to reflect how Alan could look in several years, with deeper lines in his forehead and gray hairs blending into darker ones at the sides of his head.

William Resnick had never noticed the resemblance, but his wife picked up on it during her first ride in the black Lincoln sedan.

“Bill,” said Mrs. Resnick, also in the back seat, “he looks just like you!”

“Huh? What?” Bill Resnick looked up from the report’s pages on his lap.

“The driver.” Mrs. Resnick grabbed the headrest of the front passenger seat and leaned forward, saying, “I’m so sorry. I don’t even know your name.” She spoke up, as if the driver was a hard-of-hearing geezer—even though Alan was younger than both of his passengers.

Alan briefly toyed with the idea of asking the male Resnick if he remembered his driver’s name, but doubted that game would go over well. Don’t annoy a client. One of the rules of the biz. Alan introduced himself to the Mrs.

“I’m Laura,” she said. “I’m sorry we didn’t do proper introductions when we got into your car. I don’t know where my mind was.”

The line deserved repeating. After driving Bill Resnick to and from JFK airport for a couple years, Alan had never seen the Mrs. until now. Her existence was known, due to the wedding band encircling Bill’s finger. Alan had wondered what the wife was like, imagining a woman who dressed in elegant clothes, moved with grace, and performed as a fantastic hostess at dinner parties. The kind of hostess who put the guests at ease and could carry conversations about pretty much anything.

Seeing Laura Resnick this morning answered Alan’s imaginings, along with finding out she wasn’t as attractive as the picture of her in his mind. Not that she was ugly, but Alan had elevated her to a level of beauty he now realized was unfair and unrealistic. But he had been correct about her elegance and grace.

Even though Alan would never discover her hostess skills, he was going to discover the Resnick house’s interior. Having the Mrs. in the Lincoln gave the green light for Alan’s plan—once a general idea and hope—to be placed on the schedule. His patience was about to be rewarded.

Mrs. Resnick turned back to her husband and said, “What’s with the scoff?” She had lowered her voice. “You don’t think he looks like you?”

A small laugh from Resnick, or something resembling a laugh. “Hardly.” Resnick returned to his Very Important Papers.

Alan asked himself, What do you care, Rez? Always at your reports and phone. Acting like you run the fucking world.

Mrs. Resnick pushed on: “I’m serious. If you shaved off your mustache, you two could be twins. Okay, so your hair color’s different, but your faces are quite similar.”

“Laura, would you give it a rest? I need to prepare for this briefing.”

She sat back against the seat, clearly dejected. “But we have, what, two hours on the plane?”

“There’s a ton I have to cover. I don’t want to look like a fool in front of the client.”

“Fine.” Then she spoke louder again, for their supposed geezer driver’s benefit: “Alan, could you turn the radio up? Just a little?”

The NPR reporter, who had been talking about the economies of several European countries, transitioned to a new story about ethnic cleansing in an African country.

Ethnic cleansing, Alan thought. Such a safe, shined-up phrase for the meaning it tries to hide. Like “we’re letting you go.” Like you’ve been sitting outside the boss’s office for hours, a puppy crying to be let out and taken for a walk.

Mrs. Resnick gazed out the window, at the other cars crawling beside them. Was she envisioning herself in another car, yakking it up with another driver, another husband? One who was more attentive? They could’ve talked about their thoughts on ethnic cleansing, doppelgängers, and anything else that came to mind or the radio.
Maybe she would’ve placed her hand on the other husband’s knee and suggested some plans for when he was done with his presentation to the client. With his work wrapped up for the day, the two of them could’ve dined at a fancy restaurant then continued the romance at a fancy hotel. She could’ve said, “I’m glad I finally joined you on a business trip. I know you’re busy during the day, but you’re all mine in the evening.”

Has it been a while since you guys got it on? It’s not like you’ve got kids to tiptoe around.

No kids had ever yelled good-bye to Resnick as he left his house and walked toward the Lincoln during one of Alan’s pick-ups. And no kids had ever yelled hello when Resnick made the reverse journey. No minivan was parked in the Resnick driveway. Instead, a silver Lexus RX. Other times, a red Infiniti Q60. His and hers. Alan had changed his decision several times in trying to match which car belonged to husband and which to wife.

Also, no dog had ever appeared at the door. No finely bred dog barked and wagged its tail to bid its master adieu or hello. All the clues pointed to a married couple living a comfy life in the nice suburb of Westbury with no kids or pets.

Earlier this morning, when the Resnicks had left their “we’re quite well off financially and like to show it” type of house, they hadn’t poked at a security system’s keypad. There had been no tell-tale chirp of a system being armed. As both Resnicks had approached Alan, standing by the Lincoln’s open trunk, he had almost leaped with joy.

It’s too good to be true. Wait. Don’t get ahead of yourself. Get the details first.

Alan had greeted them with a perky “good morning,” and loaded their luggage in the trunk. The Resnicks had climbed into the back seat, and Alan shut the door behind them. Then the drive and careful information gathering started.

Alan had said, “Good to finally meet you, Mrs. Resnick.”

“Likewise,” she had replied. “And I want to thank you for taking such good care of my husband. He tends to run a little late.”

A harumph from her worse half.

“It’s true, Bill.” Mrs. Resnick had a soothing voice. Her attention returned to the driver as she said, “But you’ve kept him from missing his flights.”

“All in the job, ma’am,” Alan had said. Modest and polite. Keep it up, soldier.

“And this morning, it’s important not to be late.”

“Because I’m going with him, of course,” Mrs. Resnick had said. “We have old friends in Chicago, and it’s been too long since I’ve seen them. Far too long. When Bill told me he’s going there for a meeting, I jumped at the chance. It’ll be a mini vacation. Just from today to Sunday, but it’ll be a chance to relax and sightsee. Right, Bill?”

Alan pinched his thigh to test if this was a dream. He didn’t wake up.

The Lincoln exited on to the ramp toward Kennedy airport and eased to a stop at Terminal 7, underneath the United Airlines sign. Still plenty of time to catch their 10:05 flight.

Alan went into the steps of the departure routine. Clicked on the car’s caution lights. Pressed the button to open the trunk. Got out of the car and was slapped by the noise of the morning rush: a plane taking off, cars honking and jostling for space. Alan opened the back door on the curb side and offered his arm to Mrs. Resnick. She looked surprised for a second then thanked him, grabbed his suit jacket-covered forearm, and pulled herself out of the car. Alan hoisted the luggage from the trunk and set it on the sidewalk.

Alan said to the couple, “I hope you have a wonderful time in Chicago, Mr. and Mrs. Resnick.”

Mrs. Resnick flashed her husband a look, and since she presumably didn’t see the signal she anticipated, her hand slipped into her handbag.

Alan smiled. “No need to tip me, ma’am. The limo service is paid through his company.” Alan nodded to Resnick.

She looked relieved as an uncomfortable moment passed. And Alan wasn’t about to tell her that good, ole’ Billy Resnick wasn’t that great of a tipper when replying to Velox Limo’s invoices. The subject of frequent complaints Alan shared with his boss, Hank.

“Let’s go,” William Resnick said and started wheeling his luggage away. Off to check his bag and show the world how it should be run.

“Have a good day,” Mrs. Resnick said to Alan, seemingly embarrassed by her husband’s brusqueness, before she went to join him.

As Alan watched the well-dressed couple walk through the doorway of the airport terminal, he imagined conking William Resnick’s skull with a cartoon hammer, slumping him to the ground so hard that stars and tweeting birds orbited his already swollen head.